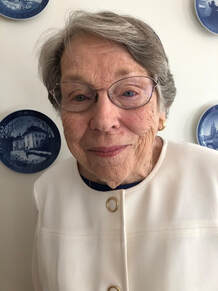 ​The Power of an Invitation

Never underestimate the power of an invitation.  In 1949, Anne Weber Poulsen (Bolton) was a timid 14-year-old who loved to play the piano.  Anne and her brother Pat used to visit friends Jeannie and Jerry for teenage fun.

Anne’s home life was loving, but often unpredictable until her father came home in the evenings. Her mother struggled with alcoholism.  Anne attended various worship services but felt they were either not inviting or it was too intimidating when others came forward or led prayer.

One afternoon, Jeannie and Jerry invited Anne and Pat to come to church with them the next Sunday at First English.  “It immediately felt like God was there in the service,” Anne shared. “This was what church was meant to be. Many adults took an interest in the youth and young parents. If you weren’t there on Sunday, somebody told you they missed you.”
At First English, Anne found stability and extra grandparents. Through their support and encouragement, she became more involved in the music and with the people who cared for her. Through those connections, she even met her husband Chris Bolton, and they were married in the church. He and Anne had four children baptized and confirmed there, attending church and Sunday School regularly.  Through the church Anne and Chris developed a strong faith that carried them through life’s highs and lows.  In 1973, their faith supported them as they insisted Anne’s mother come to live in their three-bedroom home with their family of 6, providing a stable life for all for over 15 years.

Through this experience, Anne’s mother also became an active member of First English, participating with Anne in the Women’s Group.  One invitation from a neighborhood friend made a difference in the life of Anne, Chris, their children, and her mother. God’s very real presence at First English is made manifest in its church services, in its members and through their engaging activities.